There are two different DH projects that we looked at this week that I would be interested in doing, either a 3-D modeling project or a mapping project. The topic of my project would probably be an archaeological site, either related to the classical period or maritime archaeology.

The data I would need for these projects would depend on the type of project I ended up doing, although there is some overlap. In general, for either one of the projects, I would need academic journals and books, photographs, the locations of features in the site, historical texts related to the site, and several maps from different time periods. I could get some of this data through academic journals, other online sources, and the library.

The three exercises I chose to do were #06 My books, #17 my inbox, and #22 What I eat. I have completed the data gathering for all three exercises. What was unexpected as I tracked this data was how many books I have that are not very well organized. I try and organize my bookshelves by author and series or for example, all of my textbooks are on one shelf. This exercise showed me that I have sometimes the entire series all in a row, from first book to last book, but as I was doing it, I realized that for other series I would have book 2 and book 3 were right next to each other but book 1 was on a different bookshelf. One of the other unexpected things I realized was for some digital books that I had not read in a long time, I had to go and check what the completion percentage was because I could not remember if I had finished them or not.

The DH project I looked at was The Connections in Sound Project by Patrick Egan. The project aimed to create connections within the thirty-seven collections of Irish Traditional Music in the American Folklore Center in the Library of Congress and the role of the internet and archives. Egan also examined the type of music, how it was collected, and how it can be accessed within the collections.

The website for the project only has two pages. The first page contains two quotes from John Miles Foley’s (2012) book Oral traditions and the Internet. Clicking on the link contained within the author’s name opens to the University of Illinois press’ page for the book. The first page also contains a brief introduction to the project. The first chart on the page shows a color-coded list of the types of music contained within nine of the collections. The second visualization creates connections between the type of music, ten collections, how the physical recordings were initially done, and how they can be accessed.  The second page looks at mapping where and when each of the collections came from.

The visualization of the first chart can be filtered for the type of music. The second visualization is a little bit harder to make sense of because all the connections overlap and interweave so it is difficult to figure out what connects where. This problem was solved by making each of the parts movable which makes it easier to see the connections. The introduction to the third visualization on the second page says it uses US census data from 1900 to 1980 and the location of the collections on a map of the United States. I cannot see the map or the census data, so it looks like a bunch of somewhat randomly placed dots that each correspond to part of a larger collection. However, clicking on the dots is cool because it opens a google document that contains their data from the collections for the project. One of the things I was expecting with this project was accessible audio files for the music like the religious sounds project we looked at in class.

The exercise I had the hardest time with was the drawing emotions with shapes because with some of them I struggled with trying to figure out how to show the emotion within the drawing. 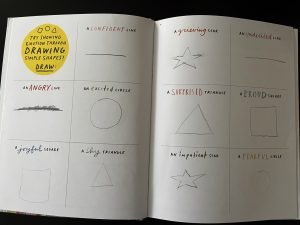 The schema I would create with the travel log would be trying to find out how much time of the trip was spent doing various activities or being at certain places. I would create seven categories, six of which would correspond to the entries of the stops like food and drink, supply stops, gas stations, hotels and Airbnb, time spent parked or at rest stops, and then a miscellaneous category that would include entries that did not fit well into the other categories. The seventh category would be time spent driving. 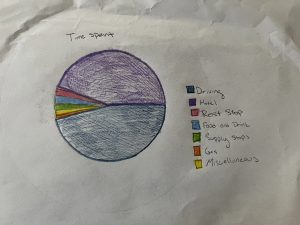 Hi! My name is Katherine. I am a senior majoring in Anthropology and Religious Studies. I chose this course because it sounded interesting and I wanted to improve my computer skills.

I ask this a lot when trying to figure out my computer: