In my undergraduate career I was fully convinced something called ‘culture’ existed out in the world, waiting to be delineated and studied if only I could acquire the right tools. As I expanded my methodological repertoire and explored seminars on theory and philosophy, the impossibility of the existence of subjects and objects beyond the systems of discourse and language that call them into being seemed increasingly attractive. For fans of The Matrix, I was taking the red pill and pondering the function and construction of my experience of my own existence.

When bound up in a particular version of reality it can be difficult, and at times feel nearly impossible, to reflect critically on the role of processes that – despite their convenient anonymity –largely determine the version of reality you are exposed to. The structures informing our daily lives often operate undetected because, over millennia, they have been refined to adhere to pre-existing mental structures. It is difficult to reconsider the world you inhabit (and have inhabited for some time now, i.e. your entire life) as highly constructed and inherently contingent. The animated American sitcom Rick and Morty gets at this in one of their episodes in which they face off against aliens, headed by Prince Nebulon, who trap them in an alternate version of reality and even admonish the duo for believing they have escaped only to realize they were in a simulation within a simulation. 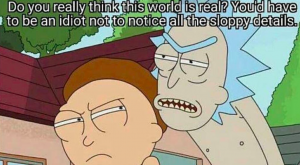 The ‘sloppy details’ Rick is attempting to reveal to Morty are difficult to discern because they are those that, when combined, manufacture our individual versions of reality which we falsely assume embody some level of continuity between otherwise disparate elements of our lives. Their anonimity is no accident, societies have become highly successful at indoctirinating their members by eliminating evidence of ‘sloppy details’, though the evidence of these erasure efforts becomes increasingly evident once a member is aware of the utter contingency of their exepriences. In The Evidence of Experience, Joan Scott claims our conceptions of our own experience and assumptions about it  “…preclude examining the relationship between discourse, cognition, and reality.” We believe ourselves to be autonomous beings capable of generating an objective account the world we inhabit and our place in it, Scott posits, only in so far as we validate representational narratives and preclude investigative analysis of their emergence.

My job as an aspiring scholar of religion is to look at the ‘sloppy details’, prod them, and think critically about the constructed nature of our perceptions of reality. The Matrix focuses on a computer hacker under the codename ‘Neo’ as he is approached by a man named Morpheus who offers Neo two options; the infamous red and blue pill. The latter ensures Neo’s life will continue smoothly as it always has while the former will reveal the enigmatic ‘Matrix’ Neo has caught glimpses of during his computer-based exploits. “…You take the red pill, you stay in Wonderland and I show you how deep the rabbit hole goes,” Morpheus states ominously.

“Why do my eyes hurt?” Neo asks as he awakens in the ‘real world’ for the first time, “Because you’ve never used them,” Morpheus replies. Much like Neo is only able to understand the full force of the Matrix once he is outside of it, as scholars it can be easy to fantasize about a theoretical space where we might discuss discourse outside of discourse itself. In our daily lives we must realize that such an outlook suggests we have not fully digested the consequences of the ‘red pill’, for if we nod to the theory of discourse as the means of situating reality then we may never bracket our interests as ethnographers or researchers in order to find a more real reality in excavating the reality we are presented with. There is no presentation that precedes representation.

49 Replies to “Choking Down the Red Pill”