When approaching this project, I chose to research the religious distribution in the United States. I was not only interested in the current religious landscape, but I also wanted to look at the history of how the dominant religions came to be in our country as well as what trends were predicted in the future with respect to religious distribution. I found that there was quite a bit of data on the historical formation of religions in this country. There was also a fair amount of data that was available for the current religious landscape. Many of the resources I found featured data collected through public research institutes and independent analytics/polling companies. I was surprised to learn that a pattern has recently emerged where a larger percentage of the population considers themselves religiously unaffiliated as well as a decline in those who identify as Christian. Surprisingly, numbers for the other two dominant religions, Judaism and Islam have remained relatively consistent in a steady increase over time. I still struggle with the Flourish program; however, I have found using the Voyant-Tools has been much easier. I also have found Scalar to be user friendly. Here is a Voyant visualization I plan to use in my final project. 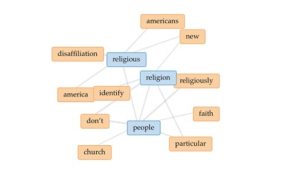