My Data and Datasheets project started off a little slowly because I had a difficult time narrowing down my topic. I finally decided to research the landscape (distribution) of religions in the United States. I specifically wanted to look at the historical formation and distribution of religions as well as the current distributions and future projections. It has been very interesting combining the numeric data and seeing the many ways you can break it down into visual data. I also am enjoying researching how religions such as Christianity, Judaism, and Islam have come about, and I am including those who classify themselves as non-religious. My only concern is condensing the information to present in the essay. I have also struggled with using the visualization programs from the previous lab. Omeka was challenging initially, but I am working through the fields and making changes as I learn more.

Questions I would be asking for digital essay in final are where did Scots Irish emigrants originally settle in America, what regions of United States today have Scots Irish roots, what were routes Scots Irish traveled as they settled in America, and what Scots Irish mean. I would use map for my data to show where my Scots Irish ancestors lived when they left for America. Data collection is going good. Not all Scottish lived in Scotland.

My data collection for the final project is coming along well. I final decided on what to do for the project, how to construct the project in order to achieve the goal. I am really interested in philosophy, so I knew I wanted to make a project with a philosophical theme. I decided I will analyze all of the Socratic dialogues Plato wrote through the software called Voyant in order to pull the most frequently used words within each of the texts. I will then get that data and plug it into Flourish to produce a visual of the top 5 words in each dialogue. This will enable the viewer to reference multiple texts and detect any patterns that might (or might not) be there.

I followed the steps for the assignment, but definitely had difficulty with the tabs and headings being transferred properly into Flourish from the data source. I chose an interactive projection map that shows the concentration of the Jewish population of each state. You can also click on each individual state and explore the specific population of that state based upon the data source. This is helpful for my research because I am exploring the Religious Distribution in the United States and the projection map is a great visual for looking at where different religious groups reside. This same map can be utilized for Christians, Muslims, as well as atheists in each state. This was a challenging assignment and really tested my technical skills. 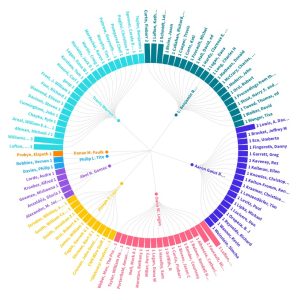 I took the data from the bulletin and put it back into flourish, and in doing so, I attempted to better visualize which sources were cited by authors and how many times. I was a little bit frustrated because I had similar issues to the ones faced in class where I would copy and paste something incorrectly or include the wrong header.

I think my graph demonstrates to the reader how many sources an author actually uses when writing articles and essays. In gathering research items for this class I was reminded of how much stuff goes into a piece of work that’s to be presented. Hopefully this graph demonstrates something to that effect.

I used the visualization we created in class. This allowed me to follow along so that the visualization turns out as well as possible. The data allowed us to see the authors and the amount of citations the author and co authors had. I choose to present the data in a network graph because it is easy to clusters of citations and easily grasp the data on a first glance.

I’ve been very interested in the age of local churches in Tuscaloosa. So I went about looking into the age of churches in town. I originally thought that the information would be readily accessible. This was not the case. I actually ran into an Omeka project that was trying/ had tried to do what I am doing! Their information seems to be coming out of old Tuscaloosa newspapers. My information was being pulled out of their stuff and a database of historical markers, which had the inscription on them. I think this communicates the oldest churches in town, and in my very cursory research i discovered some interesting threads that could lend themselves to more data, perhaps an affiliation chart. I used an assignment that displayed time because I thought that most relevant to what I was looking at.

My data includes a large list of films (still a work in progress) that include dialogue mentioning the name “Jesus”. This can be in any form or sentence like “Jesus Christ, he’s gotta gun!”. I’ve got a list of about 200 films so far that I’ve organized by genre, year released, the exact time that the line of dialog was delivered, with a small video clip (1-3 seconds) for each line from each movie. I am hoping to have over at least 500 entries for my project. I found it challenging to choose a graph type on flourish. There are not too many options that include media, so I had to take my data in a different direction. I do not think the graph that I chose is the best way to display my data. This graph does not have enough space, and a bunch of the circles cover each other making it hard to see all of the films. I had to make my data more focused by distinguishing the quotes between “Jesus” and “Jesus Christ”. I still am unsure of the best platform for my data, but flourish definitely helped me learn what won’t work.

The graph I made is looking at the author’s affiliations, universities or organizations, and the dates of the publications (2015-2019). First, I copied the publication dates from the author spreadsheet into a google spreadsheet then I did the same with the affiliations. Using the two columns, I made a pivot table where the publication dates were in the row section and affiliations in the columns. Using the value option, I selected the calculated field using the affiliations information. For this project I chose a column chart (stacked) from Flourish because it looks at the number of articles published on a specific date and allows for looking at different things within that information. The graph’s x-axis is the publication dates and the y-axis is the number of authors published on that date subdivided by the number of authors from each university or organization. I initially tried to use the data from 2010-2021 but it was so large Flourish would not display it properly so I reduced it down to the first five years in the document.

I think the information my graph communicates to the viewers is the number of authors who published articles and the affiliations of the authors. It looks like most of the authors are affiliated with colleges or universities, but there are some who are from organizations, like the American Academy of Religion, and independent scholars.